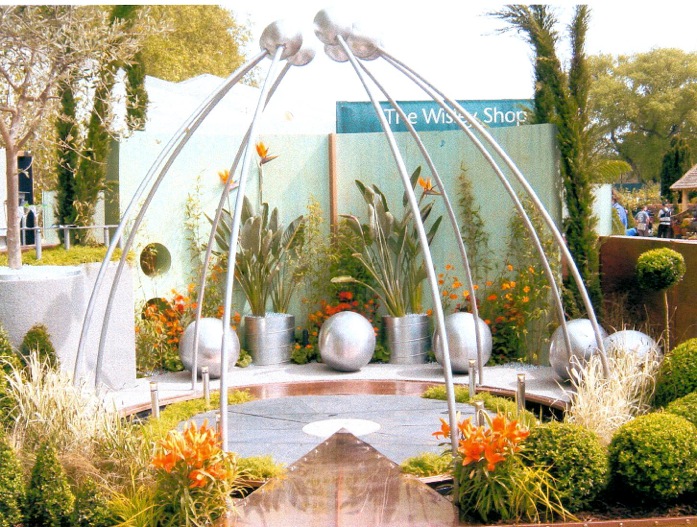 I don’t really go in for competitions but am proud to say I won a silver medal at my first & only foray into the ultimate of competitions – RHS Chelsea Flower Show. I  also won the much coveted BBC People’s Choice Award for my garden in the City category. It was called “The Chic Hip & Groovy Dance Pad” & was designed purely for fun & to grab attention – it did! Hardly surprising with a name like that it got lots of interest – worldwide indeed.

All positive, it launched my career in a new direction as a garden designer. It’s been 18 years now & people keep asking if I will do it again – unlikely I’m afraid as I’m usually booked up with work for at least 6 months at a time. I absolutely love what I do & hate to turn down super projects so it’s most likely a one-off but who knows? Watch this space 🙂

My Circles garden was shortlisted for the Society of Garden Designers review which was quite an honour as was my Community garden too.

I get all the praise I need from my clients – there are quotes dotted throughout my site here. These are a few quotes from my Chelsea debut.

“People have been telling me how much they liked the garden…. even Prince Andrew!”

“Winning the BBC People’s Choice Award is a clear indication that in the eyes of the public, Jo’s garden is a definite favourite!”

“Well done Jo, I’ll have to order one for the wife!”